Andy Murray acquired Cromlix House, close to his hometown of Dunblane, signalling not only a return to his roots but the chance to reinvent the glorious era of grand country house living. Following extensive refurbishment, the US Open, Olympic and Wimbledon champion has transformed the elegant Victorian Perthshire mansion into a luxury 15-bedroom and Gate Lodge, five-star destination 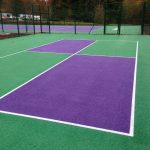 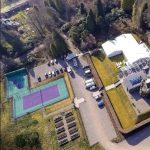 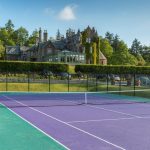 The Hotel opened in Spring 2014

It offers guests the chance to experience the sort of decadent lifestyle once enjoyed by the Lairds of Cromlix, redefined for the 21st century by sumptuous surroundings and impeccable yet discreet service. Situated in beautiful countryside, just three miles from Dunblane, Cromlix is set in 34 acres of secluded woodlands and garden grounds.

As part of the refurbishment a new Single Tennis Court and Kids Zone were built, painted in Wimbledon Purple and Wimbledon Green.

The courts were installed by DOE Sports North Ltd who sub-contracted the painting and lining to ColourWorks. 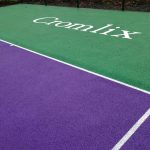 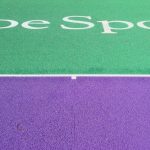 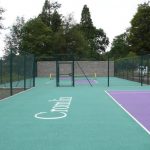 Confirmed that Judy Murray has received special permission from Wimbledon to use the colours.

He said: “The first time I met Judy up there at Cromlix was last April, before Andy won Wimbledon in the July.”

“She was clear then that she wanted Wimbledon colours.”

“There was no discussion. Our manufacturer knows the colour numbers. We got it exactly right.”

“Judy sorted it out with the All-England Club. She’s done a lot for them.”

“Judy wanted what you see on the ATP tour courts so they’ve got the hotel name at one end and Doe Sport at the other end.”